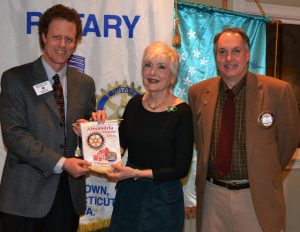 For Christine Hall, there are only three events in her lifetime that shook her to the core.

The first came when she was in high school, and to this day, many Americans of her generation still remember where they were when former President John F. Kennedy was assassinated.

And the third left a nation stunned when 20 students and six adults were murdered at Sandy Hook Elementary School in Newtown, Conn., on December 14. While most Americans went home and hugged their children a little tighter, Hall, an employee at the Alexandria Law Library, got in her car and drove north. She arrived in Newtown two days before Christmas.

“I’m telling you, I wouldn’t have missed this for the world,” she said.

A lifelong librarian, she wanted to help set up the library at the new school for Sandy Hook students, but the task, a police officer told her, had already been completed.

So the next day, she attended the 7:30 a.m. mass at St. Rose of Lima and listened to a sermon from Father Bob, a familiar face on televisions around the country, as the nation watched the town mourn. Afterward, she went to view the memorials sprawled across town.

They just sprouted up overnight: Christmas trees adorned with ornaments and cards from as close as Vermont and as far away as France. Twenty-six stockings were hung along a cemetery fence on Church Hill Road. Farther down the street, 26 Christmas trees — one dedicated to each victim — flanked the way to the Sandy Hook volunteer fire station.

“If you took the time to look at each thing, it was really quite touching,” Hall recalled.

She spent two hours making her way up and down Church Hill road before returning to the town’s center. There Hall came across another memorial filled with more trees, posters and gifts to commemorate the victims. It stood at the intersection of Church Hill, Riverside and Glen roads, and it was there she left a piece of Alexandria.

It seemed like the perfect spot. The tree was already dotted with ornaments, flags and stuffed animals, but there, under the watchful eye of an angel statue, stood an empty branch. Hall wished she had something — a candle or card —to leave behind, but the only thing she could think of was a banner from the Alexandria Rotary Club.

It’s customary for Rotarians visiting other cities to carry their banners with them in hopes of meeting a fellow member. And many chapters have banners spanning the globe — an Alexandrian Rotary Club member even left one at Mount Kilimanjaro — as well as hundreds of banners from visiting members lining their meeting rooms.

So hers, which she carried in her trunk for two years, would have to do. She hung it on the branch and left hoping it wouldn’t get taken down but unsure it was completely appropriate.

“I think my work here is done,” she said and left Newtown.

But a week later Pat Caruso found Hall’s banner. So she would return.

Caruso, a Newtown resident and president of Associated Refuse, and his employees faced a daunting task. It was time for the town to begin the healing process, and the first step was to rid the roads of the countless memorials erected to honor the Sandy Hook victims.

It was a job no one wanted to do.

But his company specialized in waste removal and could provide containers to protect the Christmas trees from an impending snowstorm, preserving the plants and their decorations.

Residents decided all organic material — the trees, flowers, plants and wreaths — would be ground into compost for a permanent memorial. Non-organic items — toys, ornaments and signs — would be mixed into the concrete for the display.

And so Caruso and his team deployed to the firehouse, removing the trees in the dark of night. They made their way down Church Hill Road and packed away the three Christmas trees left at the center of town, before finally finishing around 4 a.m. December 29.

While 28  trees were stored safely in the company’s warehouse, Caruso’s team was one container short. A lone tree would have to brave the cold and the snow, and when Caruso awoke later that morning, it was the only thing he could think about.

He made his way to the warehouse and found a way to drag the tree into the shelter, brushing snow off its branches with his hands. There, as flakes fell to the ground, hung a banner from the Alexandria Rotary Club.

“I did not expect that,” said Caruso, a past president of the Newtown Rotary Club. “I didn’t expect that at all. It was the first thing that caught my eye.” He placed a call to Mary Wharton, the secretary of the Alexandria chapter.

“He said, ‘Can you find out who the angel was who left this banner on the memorial in Newtown?'” Hall recalled. Wharton knew right away — it was her best friend.

“Things do happen, and this is one of these great things in the world,” Caruso said. “I guess God was watcing out for us; it was meant to be that I was the one who found that friend.”

After contacting Hall, Caruso asked if he could present the banner to his club. But no, Hall said, she would love to do it herself. The Alexandria Rotarian made the journey back to Connecticut and officially presented the banner to the Newtown Rotary Club at the Inn at Newtown.

“They treated me like I was…like I had done something so significant, and it was just a little thing,” Hall said.

And in return, the Newtown Rotary Club sent a banner to Alexandria.

“I think…the message I carry away from this is love is circular,” Hall said.

Though the memorials honoring the victims of Sandy Hook have been swept away and the town continues to heal, Hall’s banner will grace the walls at the Inn, bearing the memory of good will and an unexpected fate in a time of tragedy.

And as if to serve as a constant token of Hall’s journey to a town engulfed in sadness, the Alexandria Rotary Club will always have a reminder of its connection to Newtown — one that began in grief but ended in friendship.

Dependable and Courteous service that is second to none.

From the small deli to the large retail store, our services meet all unique commercial needs. Need a container at home? No Problem.