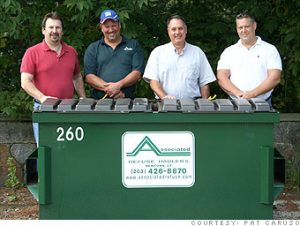 Pat Caruso expected his waste removal company to suffer a little pain from rising gas prices. He was wrong. It’s suffering a lot.Because of the trend, the CEO of Associated Refuse Haulers has had to shell out thousands of dollars in extra daily expenses, and watch his profits take a beating.

Associated Refuse Haulers in Monroe, Conn., removes trash and garbage for residential and commercial businesses. In the past, the company has weathered mounting gas prices without much damage.

But this time, Caruso is not so sure.

On top of rising prices for fuel and oil, which Caruso uses to keep the parts in his vehicles moving smoothly — the company is dealing with higher taxes and pricier inventory and parts.

For a long time, he has absorbed it all, but recently has passed some of the costs onto his commercial customers.

His biggest concern is that gas may be on its way to $5 a gallon and that “will be the tipping point for us and many other companies,” he said.

“You will either sink or swim.”

By Catherine Clifford and Tania Padgett

Dependable and Courteous service that is second to none.

From the small deli to the large retail store, our services meet all unique commercial needs. Need a container at home? No Problem.